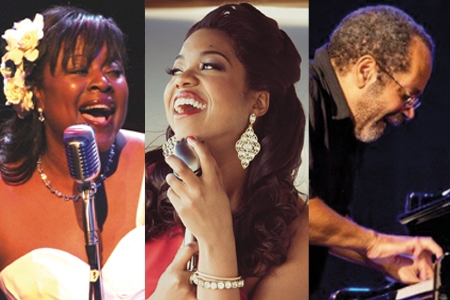 Pamela Hart was born in Los Angeles, California, and moved to Austin, Texas in 1982. Highly regarded as Austin, Texas’ finest jazz vocalist and noted by Austin Women’s Magazine as “Austin’s First Lady of Jazz,” audiences rave about Pamela’s excellent pitch, clarity and soothing vocal quality. Her sultry rendition of classic jazz standards and contemporary music wins immediate acceptance by any audience. She gracefully dances on stage with the music, her radiant voice, and showcases her effervescence and vocal range. While off stage, Pamela has been active in music for 20+ years and willingly contributes to the community, expressing her graciousness and giving ways as well as her artistic endeavors. She has significant performance credits by notable artists and shared the stage with Miss Nancy Wilson, Dianne Reeves, Patrice Rushen, Kirk Whalum, Rachelle Ferrell Norman Brown, Richard Elliot, and many others. Pamela is a beautiful woman who steals the heart of any music aficionado. Be prepared to shout “encore!”

Music arranger and pianist, Nat Adderley Jr. attended the Art and Performing Arts in Manhattan, New York. In high school, he performed and wrote music for his father’s group, the Cannonball Adderley Quintet. Adderley also worked as a keyboardist for R&B singer Valerie Simpson. Adderley earned his B.A. degree in African American studies from Yale University in 1977.Nat Adderley Jr. is best known for his work with Luther Vandross. Nat wrote (and arranged) Luther’s first top 20 pop hit, “Stop to Love,” and some other important Luther songs, including “Wait for Love” and the Grammy-nominated “Give me the Reason”. Nat also arranged many of Luther’s most popular records, including “Superstar,” “Here and Now,” “If Only for One Night,” “Creepin,” “If This World Were Mine,” “So Amazing,” “There’s Nothing Better Than Love,” “Never Too Much,” and “Love Won’t Let Me Wait”. Additionally, Nat produced tracks on the last seven Vandross studio albums. These include “My Favorite Things,” “Have Yourself a Merry Little Christmas,” “Going Out of My Head,” “Knocks Me Off My Fee,” and “The Closer I Get To You,” a duet with Beyoncé Knowles. Nat was Luther’s musical director from 1981 until his death. Many other artists have had major successes with help from Nat Adderley, Jr. Nat wrote “The Wave” for Kirk Whalum, arranged Natalie Cole’s 1987 hit recording of “When I Fall In Love,” produced “Just Another Lonely Night” for Johnny Gill, arranged most of Aretha Franklin’s album Jump To It, produced Gloria Lynne’s album No Detour Ahead, and did the string arrangement for Doc Powell’s Grammy-nominated version of “What’s Going On.” Also, Nat produced tracks for the Temptations’ CD “Awesome” (2001), and Ruben Studdard’s “Love Is” (2009). Three important CDs featuring Nat Adderley, Jr. were released in 2016. “Invitation” by Nicolas Bearde (produced and arranged by Nat) got tremendous reviews and good worldwide airplay. Also, Nat appears as pianist on jazz vibraphonist Jay Hoggard’s lovely CD, “Harlem Hieroglyphs”. Finally, Nat is featured on the CD release from R&B star Jaheim, including the hit single “Back in My Arms”. In the last few years Nat has been performing (as a musical director or as a sideman) in jazz clubs and festivals in Asia and Europe, and appearing in clubs and concert halls throughout the USA with his own jazz quartet.