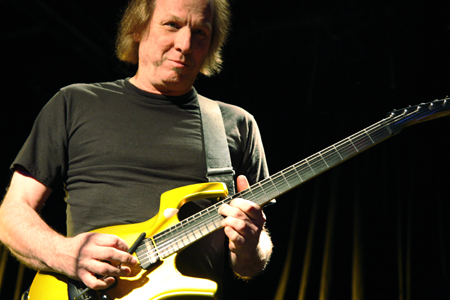 There are many ways to describe Adrian Belew. Some say he is the world’s greatest experimental whammy twang bar, czar rhino and stunt guitarist extraordinaire. Others say he is a multi-instrumentalist, singer, songwriter, producer and guitar guru. And either definition would be correct. Over the course of his career, he has released 20 critically acclaimed solo records and was the front man, singer, co-writer and guitarist for progressive rock powerhouse King Crimson for 30 years. With a resume that features some of the biggest names in music including David Bowie, Nine Inch Nails, Talking Heads, Paul Simon, Frank Zappa, Paul Simon, Nine Inch Nails, Tom Tom Club, Talking Heads and Tori Amos, Belew is famous for pushing the boundaries of the guitar in both technical and tonal exploration. Known for his inventive guitar sounds, he has begun mixing his unique sound, complex time signatures, witty lyrics, wild sound and technical mastery into his newest app creations, FLUX:FX and FLUX by belew.