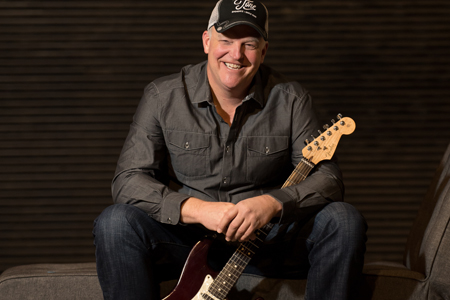 Entertaining audiences with everything from his phenomenal guitar work to his incredibly impassioned lyrics and overall songwriting prowess, one thing has certainly become clear about Albert Cummings’ music – He is far more than simply just the guitarist or the bluesman he’s often painted as by fans and the media alike. He offers the complete package. The undoubtedly masterful guitar player who burst onto the blues rock scene in the early 2000’s has also gained amazing praise as a singer/songwriter, live performer, and artist. Cummings’ debut single, “The Long Way” was released to rave reviews followed by his first big opportunity came in the form of a chance to work with Double Trouble, the late Stevie Ray Vaughan’s rhythm section. So taken Cummings’ fire and passion were bassist Tommy Shannon and drummer Chris Layton that they volunteered to play on and produce his solo debut recording. Recorded in Austin, it featured Cummings fronting Double Trouble in their first recording project since Stevie Ray’s passing. Since then he has been busy releasing multiple critically acclaimed albums and touring with blues legends B.B. King, Johnny Winter, Buddy Guy, and others.