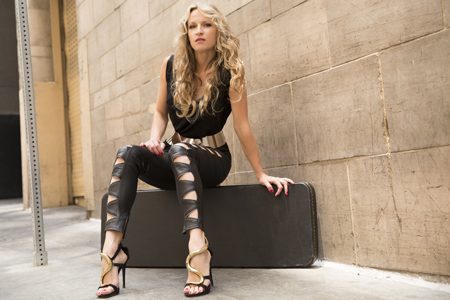 LA-based, Belgrade born guitar-player and singer Ana Popovic is back on the road promoting her new triple album, Trilogy, her most ambitious project yet. With Trilogy, she releases three albums in one – 23 funk, rock/blues and jazz tunes with guest appearances as such legends Joe Bonamassa, Robert Randolph and others. When not recording, Popovic and her powerful band are tirelessly touring, playing major blues, jazz and rock festivals. She has shared headlining stages with B.B. King, Buddy Guy, Gary Clark Jr. and more. Popovic has been nominated for six Blues Music Awards, appeared on the cover of Vintage Guitar and Guitar Player Magazine. Her albums Can You Stand The Heat and Unconditional were both Pick-Of-The-Weeks by USA Today and featured on NPR Music. Nearly all of her albums have made it on the Top 5 of the Billboard Blues Charts and are played regularly on US radio. “Ana Popovic is one helluva a guitar-player.” Bruce Springsteen “Ana rocks the blues in fine, fine fashion.“ Billy Gibbons, ZZ Top