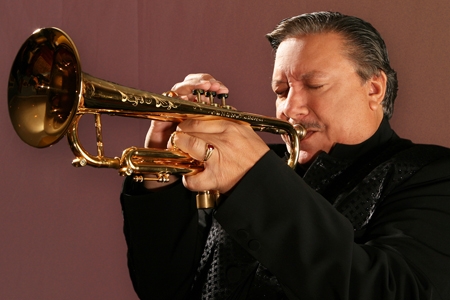 Six-time Billboard Award winner Arturo Sandoval was born in Artemisa, a small town in the outskirts of Havana, Cuba, on November 6, 1949, just two years after Gillespie became the first musician to bring Latin influences into American Jazz. He went on to become one of the world’s most acknowledged guardians of jazz trumpet and flugelhorn, as well as a renowned classical artist, pianist and composer. Sandoval is one of the most dynamic and vivacious live performers of our time, and has been seen by millions at the Oscars, at the GRAMMYs and Billboard Awards. He has been awarded 10 GRAMMY Awards, and nominated 19 times; he has also received 6 Billboard Awards and an Emmy Award. Sandoval’s versatility can be heard on recordings with everyone from Dizzy Gillespie, Woody Herman, Woody Shaw, Michel Legrand, Josh Groban, Tony Bennett, Bill Conti, and Stan Getz to Johnny Mathis, Frank Sinatra, Paul Anka, Rod Stewart and Alicia Keys amongst many others. He has performed with John Williams with the Boston Pops, and in the Super bowl with Tony Bennett and Patti LaBelle. One frequently speaks of Sandoval’s virtuoso technical ability or his specialty in high notes, but he who has seen him on the piano, lyrically improvising a ballad, or has had the opportunity to enjoy the diversity of his music, through his compositions from the most straight ahead jazz, Latin jazz or classical, knows that Arturo Sandoval is a prominent musician, and one recognizes that he is one of the most brilliant, multifaceted and renowned musicians of our time.