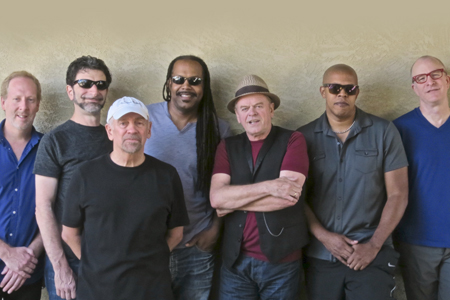 Average White Band are widely regarded as one of the best soul and funk bands in music history. Though best known for their timeless instrumental mega-hit ‘Pick Up the Pieces,’ the band’s strength is in their consistently accomplished song-writing, stretching across several certified Gold albums and numerous GRAMMY nominations. Somewhat incongruously given their Scottish roots, this six-piece band took the influences of their R&B heroes – people like Marvin Gaye, James Brown, and Donny Hathaway – and developed their own ‘authentic‘ sound. A good number of their hits like, ‘Cut The Cake‘ and ‘Let’s Go Round Again‘ became hit singles and many other album tracks like, ‘Schoolboy Crush‘ and ‘Stop The Rain,’ became much sampled grooves. Many more tunes, such as, ‘Cloudy‘ and ‘A Love Of Your Own,’ amongst many others stand alongside some of the finest soul album tracks ever recorded. The current line-up of the band – this time with noted US recruits augmenting founder members Alan Gorrie and Onnie McIntyre – continue to record and tour around the world to ongoing critical and audience acclaim.