Charles Lloyd and the Marvels 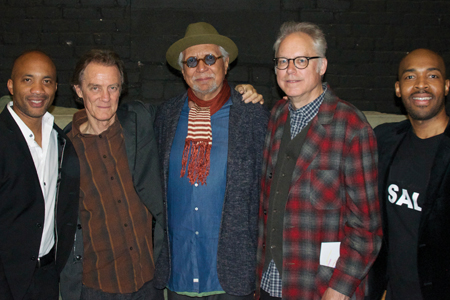 Iconic saxophonist Charles Lloyd is one of the first jazz artists to sell a million copies of a recording. From the moment he first came to prominence as the young music director of the Chico Hamilton Quintet in 1960, to his time with the Cannonball Adderley Quartet, Lloyd began to take audiences on journeys that traversed enormous distances. Over nearly five decades, his compositions have punctuated the post-bop period, embraced the traditional music of a host of world cultures, and enlivened the psychedelic 1960s with avant-garde improvisation. Credited by many musicians with anticipating the world music movement by incorporating cadences of many cultures in his compositions as early as the late 1950s, he describes his music as having always “danced on many shores.” In 2016 Lloyd continued his innovative trajectory into the upper spheres of jazz with the release of I Long to See You, a recording of pristine beauty, refined elegance, passionate emotion, and spiritual sensitivity. It features a marvelous new lineup of voices who deliver a sumptuous collection of ten songs that range from traditional hymns to anti-war folk protests to re-envisioned originals that appeared on his earlier recordings. Lloyd enlisted the rhythmic core of his stalwart New Quartet ensemble—bassist Reuben Rogers and drummer Eric Harland—and invited top-tier collaborators including guitarist extraordinaire Bill Frisell and stellar pedal steel guitarist Greg Leisz. Appropriately Lloyd has dubbed the quintet The Marvels.