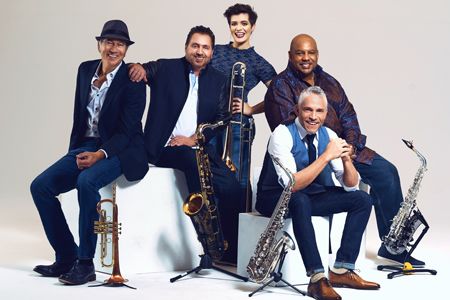 Back by popular demand Dave Koz and Friends return with the Summer Horns Tour 2018. Following highly successful tours in 2013 and 2014, Koz has assembled a powerhouse line up of Brass Instrumentation for this summer’s outing. This year, the tour will have the same electric energy delivering hit songs, including releases from the upcoming new album, Dave Koz and Friends Summer Horns, which debuted at number one on Billboard’s Current Contemporary Jazz Albums chart. Hailed by The New York Times as “a musician of unflappable rhythmic aplomb, which he happily squares against the airtight funk of his band,” Dave Koz will be joined by an all-star lineup, including: Gerald Albright, known for his acclaimed solo recordings and performances with Anita Baker, Whitney Houston and The Temptations; Rick Braun, chart-topping trumpeter, who has collaborated across genre’s with Rod Stewart, Sade and REO Speedwagon; and Richard Elliot, a former member of Tower of Power who has since forged a successful solo career. As part of the stellar lineup of musicians on stage, Koz is excited to introduce Aubrey Logan, known for jammin’ on her trombone or sailing through a song with her nothing-held-back, multi-octave vocal instrument, as well as guitarist Adam Hawley, named both Smooth Jazz News and JazzTrax Debut Artist of the Year. They will play new songs from the forthcoming Summer Horns release and songs from their individual catalogues. This live show is sure to be one of the hottest shows the summer and one not to be missed.