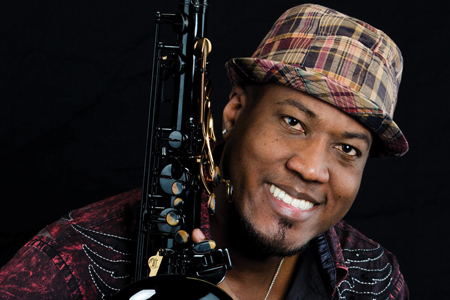 Sax man Elan Trotman has quickly become one of the fastest rising stars in jazz with over 10 Billboard topping radio singles in his young career. His latest release pays tribute to the late Motown Legend, Martin Gaye. Trotman brings a blend of smooth and tropical grooves to major festivals and cruises worldwide. In addition to a successful solo career, the Berklee College of Music graduate has also worked as a side-man with some of the biggest names in the business, including Roberta Flack, Jeffrey Osborne, Johnny Gill, Peabo Bryson, Michael McDonald, Jonathan Butler, Sheila E and Earl Klugh. Trotman is also a regular National Anthem performer for the Boston Red-Sox as well as the Boston Celtics. As an avid golfer, he has also appeared as a celebrity and entertainer for numerous charity outings including tournaments for former Celtic Ray Allen and comedian Chris Tucker. In 2014, Trotman founded the Annual Barbados Jazz Excursion & Golf Weekend, which directly supports his Never Lose Your Drive Foundation in Barbados. “I equate the name Elan Trotman with refreshing, exciting and one of the most unique saxophone voices of our time.” GRAMMY winning, saxophonist Najee