John McEuen & the String Wizards – Will the Circle Be Unbroken 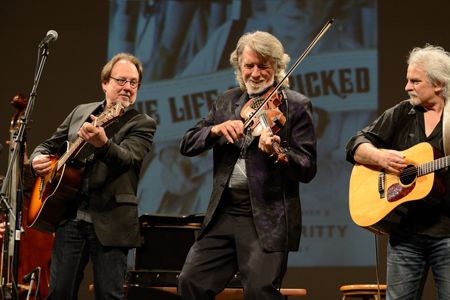 McEuen has now assembled a unique cast for a special night to share the music and memories of the landmark Will the Circle Be Unbroken record and his incredible career with the Nitty Gritty Dirt Band.  The cast includes:  Les Thompson: bass, vocals, bouzouki. Les is an original NGDB founding member. John Cable: guitar, vocals, mandolin.  John also toured Russia as a NGDB member.  Matt Cartsonis: vocals, mandola, guitar.  Matt is a 25- year music partner with John.

His multi-media show with archival photographs, film, (including 8mm footage from 1967), “…Circle…” session photos, and NGDB music takes us on his 50+ year journey – interwoven with Dirt Band favorites, hot bluegrass, and new music ….

Appearing in 4 episodes of Ken Burns Country Music, John is thought of as an integral part of the history of country music – In Episode 6, titled “Will the Circle Be Unbroken”, he describes the making of this milestone album.

All join host John McEuen, with his banjo, guitar, fiddle and mandolin, (in front of the screen), for the hits and stories behind the music, leading up to that magic time when three generations came together. The Library of Congress inducted the ‘Circle’ as one of “…the most important American recordings” (also in the Grammy Hall of Fame).

With classic NGDB favorites and music from McEuen’s new highly praised record – Made in Brooklyn – on Chesky Records. (Stereophile Magazine’s Record of the Month; honored with Best America album by the IMA, 2018), the audience is taken through some of the best years of their lives.

The Life I’ve Picked, John’s first book, has over 70 5-star reviews on Amazon.