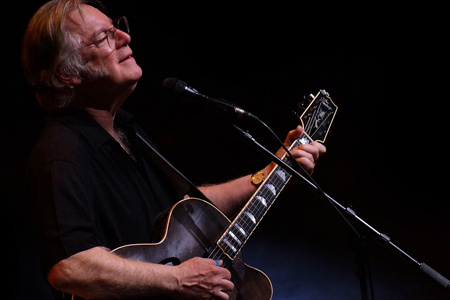 Over four decades the contributions of John Sebastian have become a permanent part of our American musical fabric. His group The Lovin’ Spoonful played a major role in the mid-’60s rock revolution, but what leader, singer and songwriter Sebastian had in mind was actually a counter-revolution. This the Lovin’ Spoonful did like nobody before or since, putting their ¬first seven singles into the Top 10. This was unprecedented, and utterly unthinkable at the height of Beatlemania. At first, they’d taken older material from blues, country, folk and jug band sources – what we now term ‘roots music’ – and made it sound modern. Then, in a series of original songs composed and sung by John Sebastian, they did the reverse, creating thoroughly modern music that sounded like it contained the entire history of American music. Which it did. Songs everyone knows by heart, including ‘Do You Believe In Magic,’ ‘You Didn’t Have To Be So Nice,’ ‘Daydream,’ ‘Younger Girl’ ‘Did You Ever Have To Make Up Your Mind,’ ‘Summer In The City,’ ‘Rain On The Roof,’ ‘Nashville Cats,’ ‘Six O’clock,’ ‘Darling Be Home Soon,’ and ‘Younger Generation.’ These songs did more than simply answer the British invasion, they carried the musical tradition into the future. In 2000, Sebastian was inducted into the Rock n Roll Hall of Fame and was the subject of the current PBS special, Do You Believe in Magic: The Music of John Sebastian. He is not only a master musician, writer and performer, he remains one of the best ambassador’s American music has ever had.