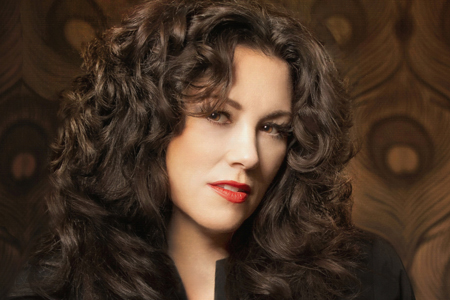 An uncompromising singer whose style is rooted in the classic country of Patsy Cline and Brenda Lee, Mandy Barnett’s keen interpretive sense enables her to delve into a song, study the intricacies of its emotional content, and render a powerful performance through her full-bodied voice. Her torchy delivery on her contemporary yet retro-sounding country and pop-tinged material harkens back to the likes of all-time great female singers and timeless sounds. Barnett starred as Patsy Cline in the musical production, Always…Patsy Cline at the Ryman Auditorium in Nashville on and off since 1994. She tours regularly in concert, nationally and internationally, and is a frequent guest on the Grand Ole Opry. Barnett has released critically applauded albums, including her self-titled debut, I’ve Got a Right to Cry, the Christmas album Winter Wonderland, and I Can’t Stop Loving You: The Songs Of Don Gibson. Critics have heralded Barnett’s talents as, “….one of the most beautiful ‘classic country’ female voices of all time. She has total control of her voice and sings effortlessly. A true master of her craft.”