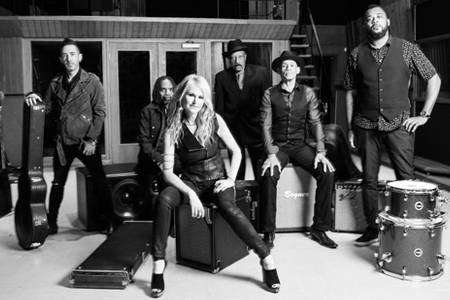 One of the most recognized and sought-after saxophonists, two-time GRAMMY nominee Mindi Abair has been electrifying audiences with her dynamic live performances and sax prowess since her debut album in 2000. No one since Junior Walker has brought saxophone and vocals in one package to the forefront of modern music with such abandon. She has garnered ten number 1 radio hits, six Top 5 solo records, and two number 1 spots on the Billboard Contemporary Jazz album chart. To help translate her sound to her live shows, Abair enlisted longtime friend and The Boneshakers founder Randy Jacobs (Bonnie Raitt, Was Not Was, Willie Nelson) to inject his brand of Detroit Rock/Funk. The collaboration was undeniable, and it lead to an almost immediate decision to join forces creatively. Their first studio album was released in September 2017 as Mindi Abair and The Boneshakers, The EastWest Sessions. It debuted number 3 on the Billboard Blues Album Chart and reached number 1 on the Blues Rock Album RMR chart. The band won a 2018 Independent Music Award for Best Blues Song Fan Award for “Pretty Good For A Girl” featuring Joe Bonamassa and they’ve received 9 nominations at the 2018 Independent Blues Awards. When she’s not touring as Mindi Abair and The Boneshakers, she can as the featured saxophonist for two season on the American Idol, as well as recording and touring with a wide array of legendary peers: Joe Perry, Trombone Shorty, Booker T. Jones, Aerosmith, Smokey Robinson, Bobby Rush, Keb’ Mo’, Adam Sandler, Duran Duran, Lalah Hathaway, and the Backstreet Boys.