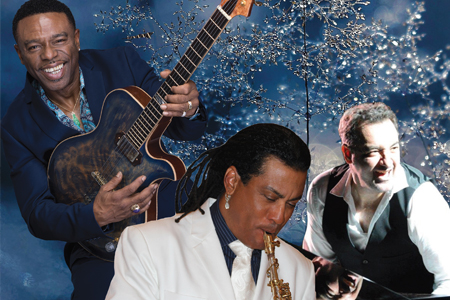 GRAMMY Award Winner Norman Brown is coming to town for a “Joyous Christmas”, with special friends Alex Bugnon and Marion Meadows. With Brown’s patented blistering soulful guitar, Bugnon’s memorable piano stylings, and Marion Meadows sweet and lilting sax melodies, a Christmas spell is cast over every performance. Contemporary Jazz/R&B superstar Norman Brown has sold close to 2 million albums in his extraordinary career and virtually lives at the top of the Billboard Contemporary Jazz sales and radio charts. Having shared the stage with virtually every Contemporary Jazz superstar from Boney James to Dave Koz to Gerald Albright. Alex Bugnon has been a prolific, energetic force on the contemporary music scene for almost three decades. A renowned musician, composer and bandleader, Bugnon hales from the picturesque town of Caux, Switzerland, site of the world-famous Jazz Festival. The annual convergence in his hometown and in his own home, of some of music’s most illustrious names played a role in his decision to pursue a musical career, as did his early friendship with Herbie Hancock. Life in the US exposed Bugnon to a diversity of musical styles, from R&B to gospel, Jazz and funk, began to shape and influence his personal sound. He began touring with almost every R&B artist, including Melba Moore, Freddie Jackson, Patti Austin, James Ingram, and Glenn Jones to name a few. But it would be his encounter with saxophonist Najee that would ultimately turn the tide for him and result in Bugnon’s first recording contract. His first album, Love Season catapulted the virtual unknown to prominence and set him on his musical course. The album rocketed to number two on the R&B charts, was nominated for Best Jazz Album at the Soul Train Awards, and earning him Black Radio Exclusive’s, Best New Artist Award. Over almost three decades, Bugnon has built a strong and loyal fan base across the country and around the world. Marion Meadows is an American saxophonist, composer, and contemporary jazz recording artist. Meadows has released a total of 14 albums. He has hooked up with numerous artists and musicians and became a well-known sideman in his own right, recording or performing over the years with Eartha Kitt, The Temptations, Michael Bolton, Will Downing, Bob Baldwin, Chuck Loeb, John Lee, among many others.