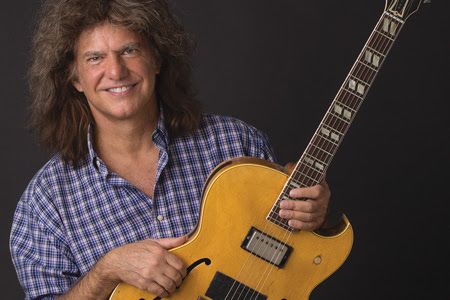 Pat Metheny is launching a new playing environment called “Side-Eye” for this upcoming season. He explains, “I wanted to create an ongoing setting to feature a rotating cast of new and upcoming musicians who have particularly caught my interest along the way. From my earliest days in Kansas City onward, I was the beneficiary of so many older musicians giving me a platform to develop my thing through the prism of their experience and the demands of what their music implied. I have been feeling like I wanted to have a specific platform to focus on some of the many younger musicians I have enjoyed recently who I have felt some kind of a kinship with.”

“I hear regularly from new players on the scene who have professed an influence from my records and tunes and I often invite them up to my house to play. Very often, it is natural and organic to the music to play with them, they have literally grown up with it. I find myself inspired by how they deal with the musical challenges that come with the territory of some of those older tunes, and at the same time I find myself intrigued with the possibilities of what might be possible in writing new music just for them. This band setting is what that will be all about.”

Metheny was born in Lee’s Summit, MO on August 12, 1954 into a musical family. Starting on trumpet at the age of 8, Metheny switched to guitar at age 12. By the age of 15, he was working regularly with the best jazz musicians in Kansas City, receiving valuable on-the bandstand experience at an unusually young age. Metheny first burst onto the international jazz scene in 1974. Over the course of his three-year stint with vibraphone great Gary Burton, the young Missouri native already displayed his soon-to-become trademarked playing style, which blended the loose and flexible articulation customarily reserved for horn players with an advanced rhythmic and harmonic sensibility -a way of playing and improvising that was modern in conception but grounded deeply in the jazz tradition of melody, swing, and the blues. With the release of his first album, Bright Size Life (1975), he reinvented the traditional ‘jazz guitar’ sound for a new generation of players. Throughout his career, Metheny has continued to redefine the genre by utilizing new technology and constantly working to evolve the improvisational and sonic potential of his instrument. Metheny’s versatility is nearly without peer on any instrument. Over the years, he has performed with artists as diverse as Steve Reich to Ornette Coleman to Herbie Hancock to Jim Hall to Milton Nascimento to David Bowie. Metheny’s body of work includes compositions for solo guitar, small ensembles, electric and acoustic instruments, large orchestras, and ballet pieces and even the robotic instruments of his Orchestrion project, while always sidestepping the limits of any one genre.