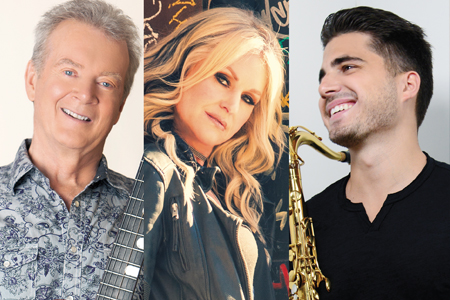 Although he has never had a guitar lesson in his life, Peter White has become known as one of the jazz industry’s greatest icons. This guitarist and smooth jazz artist whose musical career has spanned over forty years from the time he started playing with rock legend Al Stewart in the seventies and singer Basia in the eighties to his many collaborations with Boney James, Rick Braun, Richard Elliot, Kirk Whalum, Dave Koz and numerous others. One of the most recognized and sought-after saxophonists, two-time GRAMMY nominee Mindi Abair has been electrifying audiences with her dynamic live performances and sax prowess since her debut album in 1999. She has garnered twelve number one radio hits in the jazz and blues world, two number one spots on the Billboard Contemporary Jazz Album Chart and two #3 spots on the Billboard Blues Album Chart. One of the fastest emerging contemporary jazz recording artists in recent history, multi-instrumentalist, composer and producer, Vincent Ingala has blasted into an exciting stratosphere of his own making since his 2010 critically acclaimed debut album, North End Soul. Still in his twenties, the charismatic saxophonist has been named Billboard Smooth Jazz Artist of the Year in 2012, Sirius XM Watercolors Breakthrough Artist of the Year in 2013, and his music is consistently found atop the most noteworthy music charts in the world, including four number one hits on the Billboard Smooth Jazz Chart, and ten singles in the Billboard Smooth Jazz Top 10.