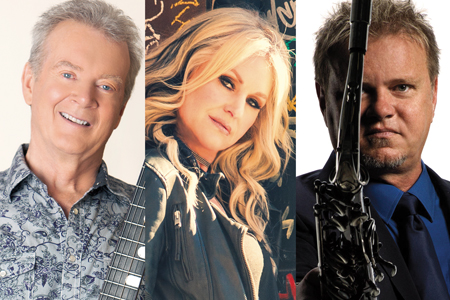 Like so many millions of us, guitarist Peter White still feels closest to the music he absorbed while growing up. As a British teen in the ’60s, he kept his ears glued to the radio—soaking up the exciting new sounds of rock bands like the Beatles and soul giants like Stevie Wonder—and tried to learn how to play those songs on the acoustic guitar his dad had given him. It didn’t take him long to get the hang of it, and now, after more than four decades as both a leader and sideman, he’s returning to those tunes that impacted him so forcefully in his youth.

One of the most recognized and sought-after saxophonists, two-time GRAMMY nominee Mindi Abair has been electrifying audiences with her dynamic live performances and sax prowess since her debut album in 1999. No one since Junior Walker has brought saxophone and vocals in one package to the forefront of modern music. In 2014, Mindi received her first GRAMMY nomination in the Best Pop Instrumental Album category, followed by a 2015 GRAMMY nomination for Best Contemporary Instrumental Album for her solo LP Wild Heart featuring the late Gregg Allman, Joe Perry, Trombone Shorty, Booker T. Jones, Keb’ Mo’, and Max Weinberg.

The multi-talented Euge Groove is not only one of the most successful contemporary jazz saxophonists around today, but he is also a composer, producer and radio host. He has been called upon by the likes of the late legendary rocker Joe Cocker, Huey Lewis & The News, Tower of Power, Richard Marx, Tina Turner, and more. His portfolio includes 13 #1 hits, millions in record sales, and legions of fans worldwide.