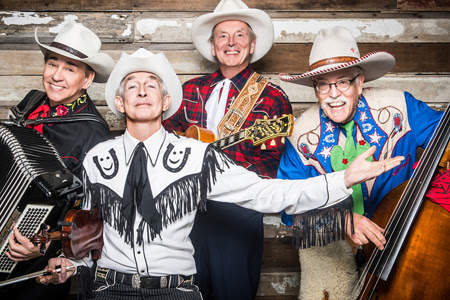 40 years seemed to go by in a blur since three young men with drive and wit decided to keep a special music alive.  They believed in preserving the heritage of Western Music and presenting it to a new generation. What they did not realize at the time was that they would be doing the same thing 40 years later. But 40 years ago, Ranger Doug, Too Slim and the late Windy Bill Collins played that first date in 1977. And while Windy Bill left, Woody Paul joined, and the true band went on to make appearances on Austin City Limits and the Grand Ole Opry (leading to membership in 1982); and a three-year run on The Nashville Network with a TV show called Tumbleweed Theater, which yet in turn led to a seven-year run on public radio with Riders Radio Theater.  The boys eventually made it to Hollywood to star in Riders In The Sky on CBS. Since then, the quartet has slowed up very little, with an astonishing 7,200+ appearances, 35 years on the Grand Ole Opry, 40 recordings, and tours of all 50 states and the world. In addition to two GRAMMY Awards, Riders received numerous awards from the Western Music Association, including the highest: membership in the Western Music Hall of Fame; numerous Wrangler awards from the Cowboy Hall of Fame and Western Heritage Museum; awards from the Academy of Western Artists; enshrinement in the Walkway of Western Stars, and more.  What began as a celebration of classic Western Music and an evening of hilarity has become a career, and that career has become a legend, one which, 40 years on, shows no signs of stopping or even slowing down much.