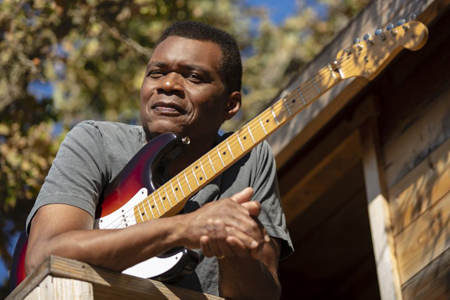 Funky, cool and bad,” is how Robert Cray describes his latest album, That’s What I Heard, just released in February 2020. “I thought if it we could get this thing that Sam Cooke used to have, the kind of sound that early Sam Cooke records had, that we could pull this off,” says producer Steve Jordan. On That’s What I Heard, Cray celebrates the music of Curtis Mayfield, Bobby “Blue” Bland, The Sensational Nightingales and more, alongside four newly written songs with the first single, “Anything You Want,” available now on all streaming services. This legendary musician has been bridging the lines between blues, soul and R&B for the past four decades with five GRAMMY wins and over 20 acclaimed albums – 15 of which have been on the Billboard charts. His 1986 album, Strong Persuader sold over one million copies. Influenced by such artists as Cooke and Ray Charles, Cray created a sound that rises from American roots and arrives today both fresh and familiar. For his 2017 release, Robert Cray & Hi Rhythm, the Blues Hall of Fame inductee traveled to Memphis to create a classic soul album with rhythm, which received high praise from fans and critics alike. Cray has performed with artists like Eric Clapton, The Rolling Stones, John Lee Hooker, BB King and Bonnie Raitt, who declared him, “an original. He’s passionate, he’s a bad ass and puts on one of the best shows you’ll ever see.”