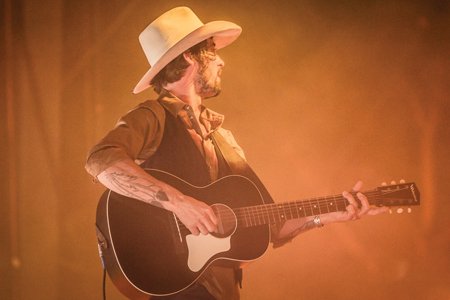 GRAMMY and Oscar-winning singer-songwriter Ryan Bingham was born in New Mexico and raised all across Texas and the southwestern United States. He set out on his own, at a young age, shuffling from town to town and performing gigs at local no-frills bars. It’s this spirit of having done plenty of living early on that has informed the singer-songwriters world-weary, weather-beaten vocals. Bingham has five studio albums under his belt (Mescalito, Roadhouse Sun, Junky Star, Tomorrowland, and Fear and Saturday Night), the two most recent of which were released under his own label, Axster Bingham Records. For his latest studio album release, Fear and Saturday Night, Bingham needed some peace and quiet, free of the burdens that had saddled him during the writing and recording of his recent albums. He relocated to an old airstream trailer tucked away in the mountains of California, camping out for several weeks and embracing the solitude to dig down deep, face down his past with a poetic grace, and craft his most powerful album yet. Fear and Saturday Night is the most authentic, personal, and deeply moving portrait of the man we’ve heard yet. In January 2018, Bingham released his first live album, Ryan Bingham Live.