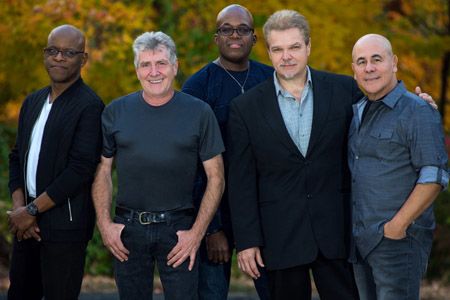 Spyro Gyra is an unlikely story of a group with humble beginnings in Buffalo, NY who has continued to reach an international audience for the past forty-five years, resulting in sales of over 10 million albums and playing over five thousand shows on five continents. They have accomplished this due to a forward looking approach combined with the work ethic of an underdog, always challenging them to do something new while never resting on past success. Spyro Gyra has released 29 albums (not counting “Best Of…” compilations), achieving one Platinum and two Gold Albums. Their critically acclaimed album, Morning Dance firmly placed Spyro Gyra as one of the most popular artists in contemporary jazz, and throughout the ’80s, their popularity continued growing. Their albums were consistent best-sellers, and their concerts often sold out. Thankfully, the band shows little sign of wanting to slow down either. Spyro Gyra’s 2013 release, A Foreign Affair, peaked at number two on the Billboard charts.