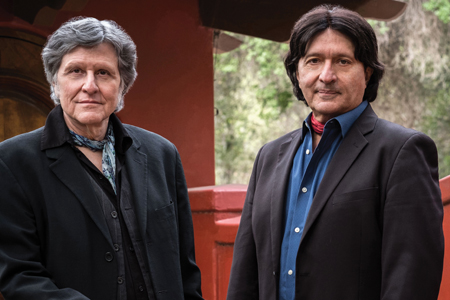 Strunz & Farah’s new studio recording, Tales of Two Guitars (2018), is the latest chapter in the continuing story of the two virtuoso guitarists who have created an original and enduring body of guitar music. Rhythmic and colorful, and recorded with 11 guest musicians, Tales is a musical storybook of a fully evolved style of playing and composing which has been highly influential among guitarists everywhere. The new recording has 13 original pieces, full of contrasts both compositionally and instrumentally, ranging from rhythmic to romantic to jazz, incorporating in varying degrees their classic mix of Latin, Middle Eastern and Jazz influences. Performing together since 1979, GRAMMY nominees Strunz & Farah are the innovators of an entirely new expression for the acoustic guitar. Well ahead of their time they created an original style that now is widely influential. Originally from Costa Rica and Iran respectively, Jorge Strunz and Ardeshir Farah have brought the musical influences of their native lands into their highly virtuosic, rhythmic, and improvisation-rich original instrumental compositions, inspiring fans and many guitarists worldwide.