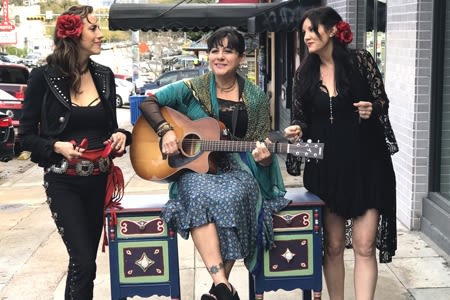 Together, melding these inspirations with their own distinct sounds and personalities, the Texicana Mamas are creating something new, fresh, vibrant and distinct.

A collaborative effort between three of the state’s most celebrated Latina musicians—Tish Hinojosa, Stephanie Urbina Jones and Patricia Vonne—the newly-minted trio has already created a buzz that complements the kudos their individual careers have collected. Debuting at Nashville’s famed Bluebird Café last fall, the Texicana Mamas have also performed at the Latinapalooza showcase during this year’s South By Southwest music festival and have other dates in the pipeline.

All three women are San Antonio natives with deep roots in the Latino/Anglo culture of South Texas. And though they came to music by different routes, each is governed by a passion for storytelling and cross-cultural musical fusion.

PATRICIA VONNE has worn many hats in her day: singer, songwriter, bandleader, actress, activist, award-winning animator and more. “I’m a ninth-generation Tejana,” she says. “A fusion of many cultures and musical influences.” Asked to describe her music she replies, “I call it roots-rock with a south-of-the border flavor. It’s always been important to me to embrace my Latin heritage through my music.” Vonne has released 7 albums (including the all-Spanish Viva Bandolera which made Top 8 in Huffington Post) Her song ‘Traeme Paz’ was featured in the film ‘ Once Upon a Time in Mexico” & she has appeared on the silver screen as Dallas (aka Zorro Girl) in the Sin City films directed by her brother, Robert Rodriguez.
www.patriciavonne.com

TISH HINOJOSA—A modern pioneer among Latina performers, Hinojosa’s debut 1989 album, Homeland, was informed by the trans-border sounds and stories she heard growing up as one of 13 children of Mexican immigrant parents. It’s 1992 follow-up, Culture Swing, put her on the map nationally, paving the way for an all-Spanish endeavor (Frontejas) and further recordings. A frequent performer at the Kerrville Folk Festival and Austin’s showcase songwriters’ venues, she also performed for Pres. Bill Clinton and First Lady Hillary Clinton among other distinctions.
www.mundotish.com

STEPHANIE URBINA JONES—Urbina Jones made the move from Austin to Nashville to work with the Texas Tornados’ management agency, and almost before she knew it, she’d penned the title track of Lorrie Morgan album. It was the start of a musical road that saw her embrace both commercial country music and Latin-rooted Americana (or, as her late abuela put it, “Country music with chile peppers.” She sang jazz in Austin and recorded with mariachi musicians in New Mexico (the fruit of the latter being her latest album, Tularosa). Fittingly, when her grandmother was preparing to pass, she told Urbina Jones, “You were born to be a mensaje (a messenger); la puenta (a bridge), sharing the beauty of our culture with the world through your music.”
www.stephanieurbinajones.com