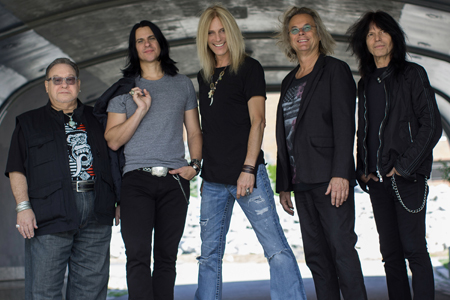 Since the early 1970’s, The Guess Who have been one of the seminal rock and roll bands in the US, as well their native Canada. Their many hit singles include, “No Time”, “American Woman”, “Laughing”, “These Eyes”, “Undun,” and “Share the Land”. The Guess Who continue to perform and record to the present day. The current lineup includes original member Garry Peterson, the drummer who over the course of an iconic career that spans more than six decades. In addition to The Guess Who, Peterson has performed with Bachman Turner Overdrive during their support of Van Halen’s 5150 Tour. Vocals are performed by the dynamic D# joined The Guess Who in early 2008, revitalizing the live show with a dynamic and interactive stage presence. He is now the longest standing lead singer the band has ever had. He has worked with a veritable who’s who in the world of music entertainment, including Red Rider, Jeff Healey, Alannah Myles, Glenn Hughes (Deep Purple), and Alex Ligertwood (Santana). D# co-wrote and produced the upcoming release from the band, along with Will Evankovich. Evankovich’s resume includes recording, writing, producing, and performing with such artists as Green Day, Don Felder of the Eagles, Robby Krieger of The Doors, and Dwight Yoakam. The Guess Who now includes Rudy Sarzo, a professional recording and performing artist worldwide with a career spanning over 35 years. He has been a member of Ozzy Osborne’s band, as well as Quiet Riot. Sarzo was voted the number one bassist in Circus Magazine in 1983. Rounding out the group is Leonard Shaw, an amazing keyboard-saxophone-flute playing-vocalizing talent whose music spans the genres from blues, to R & B, to jazz, to funk, and rock. He has shared the stage with Ben E. King, Peter Noone, The Coasters, The Drifters, and many more.