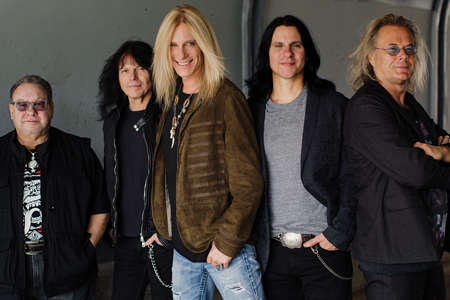 The Guess Who are a group of musical luminaires who through over four decades in show business have been loaded with more hits than the band members can count, record sales well into the multi-millions and more drama than a VH1 “Behind the Music” episode and an E! “True Hollywood Story” documentary combine. They have also connected with the masses throughout an exultant hit parade including, “These Eyes,” “Clap for the Wolfman,” “No Time” and “Share the Land.” And in fellow classic and double-sided singles like the rock anthem, “American Woman,” “No Sugar Tonight” and “Laughing,” and the Canadian bred stateside conqueros are amongst music’s most indelible treasures who are eternally etched within the very fabric of pop culture history. Not only is the band sounding better than ever, but is has scrupulously preserved the past and continues to expand upon its legacy. For anyone who has encountered one of the group’s captivating concerts, The Guess Who remains one of the most celebrated bands of all time and is forging into the future with all of the accolades deserving of a revered and still relevant trend setting rock and roll utopia.