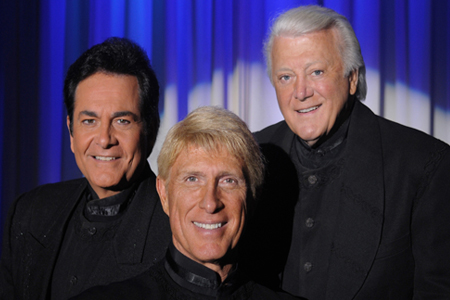 The Lettermen are Tony Butala, Donovan Tea and Bobby Poynton.

The vision of The Lettermen was of three very strong soloists who had the ability and showmanship to perform and entertain an audience, but who also had the discipline needed to be group singers. The sound they came up with was a sound between the big band vocal groups such as the Modernaires, Pied Pipers, Mills Brothers, Four Freshmen and the early R&B rock groups such as the Ink Spots, Flamingos and the Platters.

In a career that has spanned over 45 years, The Lettermen scored over 25 chart hit singles, including “Theme From A Summer Place,” “Goin’ Out of My Head/Can’t Take My Eyes Off You,” and “Hurt So Bad.” Their signature sound made romantic standards of songs such as “Smile,” “Put Your Head On My Shoulder,” “Shangri-La,” “Love,” “Traces/Memories,” and many more. Among 32 consecutive albums, which charted in Billboard magazine’s Top 40, four were certified gold.