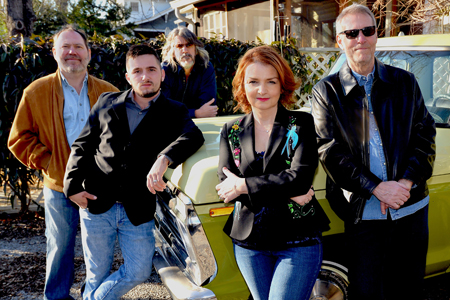 Throughout their career, one that encompasses four highly acclaimed albums and any number of awards and accolades, the SteelDrivers have proven they are one of the, “Gutsiest, grittiest bluegrass bands around,” according to The Tennessean. Self-described as what the Rolling Stones would sound like if they played banjos, fiddles and mandolins, the group has garnered critical acclaim and legions of fans with its that rock-n-roll edged music played on traditional instruments. What began as a casual get-together to jam in the late summer of 2005 became a fully committed band that earned a GRAMMY nomination on their first release.” That honor was followed two years later, when the SteelDrivers received two more nominations for Reckless, their sophomore set, one for Best Bluegrass Album and another for Best Country Performance by a Duo or Group with Vocals. The band’s third album, Hammer Down, climbed all the way up to number one on the Billboard Bluegrass charts. The SteelDrivers‘ highly acclaimed fourth album, The Muscle Shoals Recording, featuring a guest performance by Jason Isbell, garnered the group that long elusive GRAMMY win with a notable nod for Best Bluegrass Album. “You can call it power-bluegrass or country soul, but whatever you call it, Nashville’s Steeldrivers have bushels of it.” The Philadelphia Inquirer