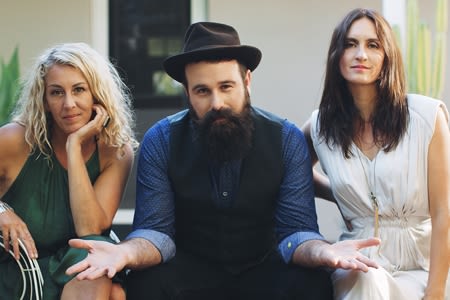 Just one look at the beautiful cover photo on The Waifs’ new album Ironbark says a lot about who they are and what they are about; friends and family bound together by their love of music, of performing and of Australia. It’s 25 years since West Australian sisters Donna and Vikki Simpson joined forces with Josh Cunningham to create one of the country’s best-loved bands. One can’t imagine a better way to commemorate this significant landmark in the band’s career than with a double album of 25 original songs, one for each year, all of them recorded in the kitchen of Cunningham’s childhood home. Since releasing their debut, self-titled album in 1996 The Waifs have established a strong and loyal fan-base worldwide, built on the relentless touring they did in Australia in those formative years, playing in any town that would have them, honing their stagecraft and their song writing skills along the way. Ironbark, the group’s eighth studio album, is a thank you to those thousands of fans who have stuck with them at home and overseas, and a fitting one given the quality of the material. In a catalogue of many great songs, from early favourites such as London Still and Lighthouse to Black Dirt Track and Dark Highway from their most recent album, Beautiful You, Ironbark is an embarrassment of riches. These are just some examples from what is the biggest and strongest collection of studio recordings in The Waifs’ amazing career.