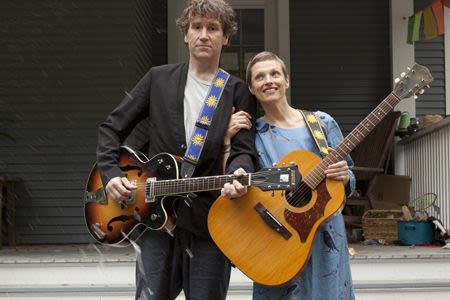 Singer-songwriters Deb Talan and Steve Tannen began writing together the night they met and soon formed indie band The Weepies. On the strength of their simple yet insightful songwriting and distinctive harmonies, they quietly sold more than 1.5 million records with over 54 million streams on Spotify, 25+ million views on YouTube and over 110k social media followers. In 2014, Talan beat cancer and The Weepies recorded the best album of their career. Sirens shows a band at the height of its powers. The couple was unable to travel while Deb was in treatment, so they worked at home, inviting guest musicians to record remotely wherever each musician happened to be, resulting in an unlikely superstar backing band. Players from across the spectrum jumped in, including, Pete Thomas and Steve Nieve (Elvis Costello), Gerry Leonard (David Bowie), Rami Jaffee (Foo Fighters), Tony Levin (Peter Gabriel), Oliver Kraus (Sia) and Matt Chamberlain (Pearl Jam), plus a horn section from New Orleans. “No one song could capture that year,” says Tannen. “…It was intense, but there was beauty and inspiration, too. Deb made it back. And we’re still here.”