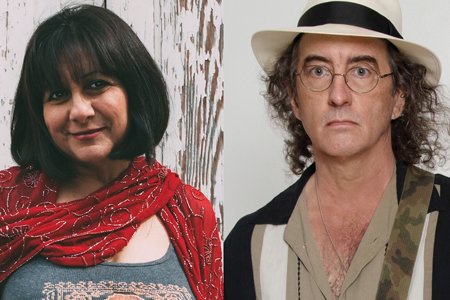 Austin’s own singer-songwriter Tish Hinojosa is releasing her 17th album West, in June 2018 – an album that includes a duet with another Texan, Michael Martin Murphey. West is yet another brilliant body of work displaying Hinojosa’s enchanting blend of folk, country, and pop while always paying homage to her Latino heritage. Her undeniable appeal has been embraced worldwide on stages where she has charmed audiences from The White House to Hamburg, Germany, where she made her home for 9 years before returning to Austin in 2013. Hinojosa’s well-deserved critical acclaim has been documented not only by her recordings but also by the features and reviews in the cities she has performed, performances as a featured guest on programs including Austin City Limits, A Prairie Home Companion, and various NPR programs but most importantly, in the hearts of her fans. She has collaborated with the likes of artists including as Joan Baez, Booker T. Jones, Flaco Jimenez, Pete Seeger, and Dwight Yoakam to name a few.
James McMurtry spins stories with a novelist’s eye. Longtime fans know his vibrant vignettes have turned heads for more than a quarter-century. His critically successful first album, Too Long in the Wasteland, which was produced by John Mellencamp, marked the beginning of a series of acclaimed projects. In 1996, McMurtry received a GRAMMY nomination for, “Where’d You Hide the Body” and in 1997, It Had To Happen received the American Indie Award for Best Americana Album. In his long career, songs like, “Childish Things,” “Choctaw Bingo,” “Peter Pan,” and Levelland” only begin the list of high watermarks, not the least of which was the album Childish Things winning Americana Music Association’s Album of the Year in 2006. Just Us Kids earned McMurtry his highest Billboard chart position. No stranger to sold-out venues, he’s been packing houses with the James McMurtry Band since the release of his first record. In 2004, the popular Live in Aught-Three demonstrated McMurtry & co.’s power on the road. In 2009, the CD/DVD Live in Europe was released, capturing the band’s first European tour and extraordinary live set. McMurtry tours year round and consistently throws down unparalleled powerhouse performances. The Washington Post notes: “Much attention is paid to James McMurtry’s lyrics and rightfully so: He creates a novel’s worth of emotion and experience in four minutes of blisteringly stark couplets. What gets overlooked, however, is that he’s an accomplished rock guitar player … serious stuff, imparted by a singularly serious band.”