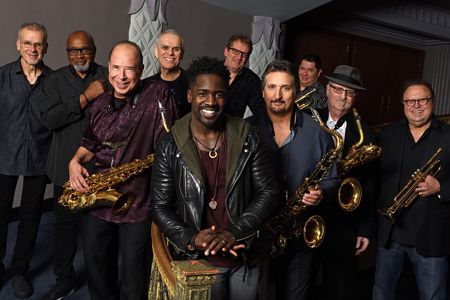 Oakland, California music legends Tower of Power – the most dynamic and distinctive band of survivors in Soul Music – is roaring into its unprecedented 50th anniversary with a dynamic new disc of all new material that finds them as energized and inspired as ever. A labor of love, definitively titled Soul Side of Town, this package is charged with 14 filler-free songs. In the spirit of their enduring theme song “Oakland Stroke,” the bookending intro and outro tune, “East Bay” shines a light on elemental instrumental ingredients within the band’s signature sound. Veteran members, Emilo Castillo (Detroit-born on 2nd tenor sax), Stephen “Doc” Kupka (Los Angeles-born on baritone sax) who hold down the world famous 5-man Tower of Power Horns. Along with the legendary rhythm section drums and bass lock of David Garibaldi and Francis Rocco Prestia, respectively, these decorated veterans have custom-crafted a hair-raising audio experience that longtime fans, music connoisseurs and a new generation of listeners will groove to for years to come. Rounding out T.O.P. are guitarist Jerry Cortez, Hammond B3 organist/keyboardist Roger Smith, first tenor saxophonist Tom Politzer, and trumpeters Adolfo Acosta and Sal Cracchiolo. Soul Side of Town is also blessed with not one but two lead singers: outgoing Ray Greene (now in Santana) and incoming Marcus Scott (boldly introduced on several selections, including “Hanging with My Baby”). This 10-piece band is prepared to throw down next year with a celebratory tour that will include sweet spots around the globe. Tower of Power has forged a reputation as a crack band of high achieving musicians fluent in all realms of Soul, Rock and Pop music with a sophistication and punch like that of a Jazz big band a band so one-of-a-kind, it’s an institution.