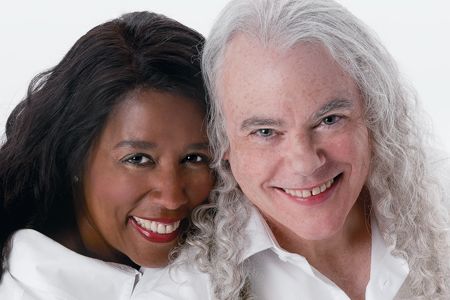 Vocalist Patti Cathcart and guitarist Tuck Andress have been a steady performing duo for almost three decades that it’s somewhat surprising that their latest release, I Remember You focuses on the Great American Songbook. Surely they’ve already recorded their take on these enduring standards. But no, it just seems so, seems as if everything they’ve written and recorded is already a standard. In their 11 previous releases, only a handful of tunes would fall under the typical, pre-rock era, standards banner. Tuck & Patti, married since 1983, are known for his simple, yet breathtaking instrumentations and her lyrically beautiful singing. ‘Patti is always the producer and the arranger,’ explains Tuck, ‘and the conductor, and I am the enthusiastically cooperative orchestra and occasionally the problem solver when the orchestra gets a little uncooperative or grumpy. We’ve definitely learned to capitalize on our strengths!‘ Over their career of jazz, R&B, and crossover recordings, they have produced a remarkable amount of music, especially considering that they rely on the textures of only guitar and voice. Other Tuck & Patti albums include the critically acclaimed Tears of Joy, Love Warriors, and Dream.