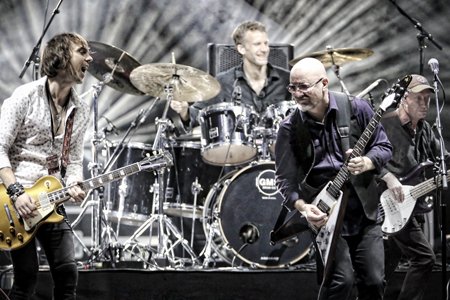 The classic rock bands of the late ’60s and early ’70s enjoy a unique place in popular musical history. The Beatles had gone their separate ways, Britain had already experienced the Blues Boom, and Psychedelia had made its impact. Wishbone Ash embarked on the nascent Progressive Rock scene in 1969, they were inspired equally by British folk traditions, as well as American jazz and R&B. It was then that the group first played to public and critical acclaim. More than 45 years later, having pioneered the use of twin lead guitars, Wishbone Ash has gained worldwide recognition, based firmly on a regime of relentless touring. They are the quintessential road band and an acknowledged influence on many other bands including Thin Lizzy and Iron Maiden. Power and melody have made the Ash a hard act to follow, while they are currently being discovered by new generations of loyal rock fans. Today, the band is still going strong, with most of their vast catalog intact on CD, an award-winning website, and a date sheet the envy of many other bands. Recording highlights are, of course, the multi-million selling 1972 album “Argus,” considered to be one of the all-time classic rock albums, together with “Pilgrimage” (1971) and “New England” (1976). More recently, “The Power of Eternity” (2007), “Elegant Stealth” (2011) and “Blue Horizon” (2014) garnered enthusiastic praise.