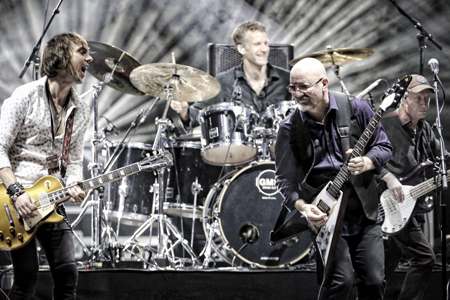 Wishbone Ash celebrates a half century of live twin lead guitar power in 2020. Fans can look forward to enjoying repertoire from the band’s vast catalog of exactly 100 unique releases, including 27 studio albums, 24 live albums, 43 compilations and box sets, and five live DVDs, along with a DVD rockumentary, This Is Wishbone Ash. Continually pushing their creative process, the band released its latest studio album, Coat of Arms, in February 2020. Formed in October 1969 in London, England, Wishbone Ash is one of the most influential guitar bands in the history of rock. Inspired equally by British folk traditions, American jazz, and R&B, the group vaulted to public and critical acclaim, touring arenas, stadiums, and theaters throughout Europe and the United States. Power and melody have made the Ash a hard act to follow, while they are currently being discovered by new generations of loyal rock fans. Through the years the band has delved into various musical genres, from folk, blues, and jazz to pedal-to-the-metal rock, and electronica. Whatever the style, Wishbone Ash’s signature is the distinctive twin-melodic lead guitar interplay that has influenced such bands as Thin Lizzy, Lynryd Skynryd, Iron Maiden, and, more recently, Opeth. True road warriors, each year Wishbone Ash logs around 30,000 road miles, roughly equivalent to circumnavigating the earth.